If you have never been to a cat show, you may not know what to expect as you may have heard some rumors that cat shows are only for stressed out, pedigreed cats.  However, that notion is far from the truth!

There are many things to do at a cat show, let’s take a look at what kinds of things go on:

There is a myth that cats are stressed out at shows and it is an unnatural place for them to be.  While there are cats who do not like to show and they are “retired” quickly from showing if they act up and are cranky, many cats love the attention from their owners and like to be admired by strangers.

Check out CFA’s list of upcoming shows at go to www.catshows.us 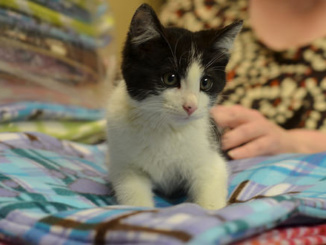 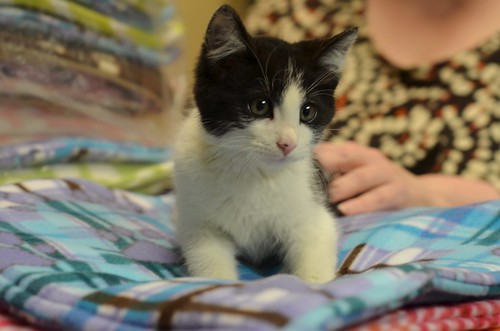 During our last fundraiser, Mary, a longtime friend of the IBKC, offered up a challenge. For every $25 we gave, she promised to stitch a super-soft fleece kitty bed to donate to our shelter.  Well, when the challenge was over, Mary got busy and started making seventy, yes, SEVENTY fleece cat beds.

Last week we met up at the shelter so she could deliver her beds to the kitties.

We stopped in the foster room first to drop off a stack of beds.  Remember that cutie pie Jackson, who came to the Internet Cat Video Fest? Well, lucky for us, he was there to greet us!  Here is having a “Prince and the Pea” moment. 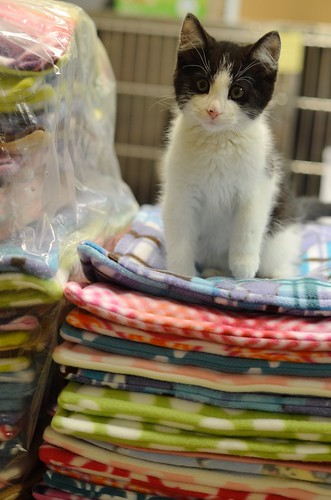 He’s such a sweet little fellow, and loved all the attention he got from Mary. 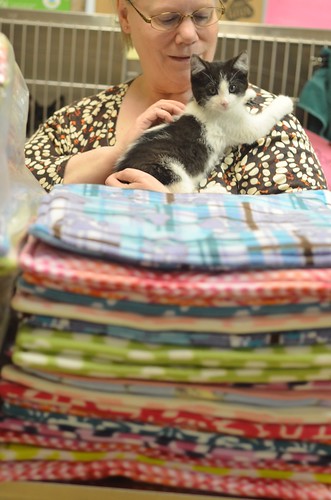 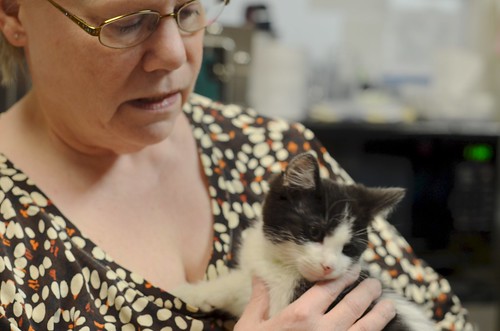 Ruth, who’s the foster care coordinator, was very happy to receive the kitty bed donation. The kittens and mama cats love the beds, and because they’re getting geared up for kitten season, they certainly do need them!

Next, we met up with Sarah, who works in the cattery.  She was so thrilled to receive a big stack of beds for the big cats. They’ve been running low on them, so the timing was perfect!

Thank you, Mary, for being generous with your time and creating so many of these wonderful beds for the shelter cats and kittens!  I know a lot of heart, effort, and hours went into the creation of these — we appreciate this huge gift you gave!!  Thank you to all you donated during Mary’s challenge, too!

And thank you to Sophie, Mary’s lovely Calico, for posing so beautifully for these photographs.  I’m sure your kitty heart was broken when your mama packed up all your beds and took them away!  I understand she still has a little fleece left over. Maybe she can make you one to call your own! 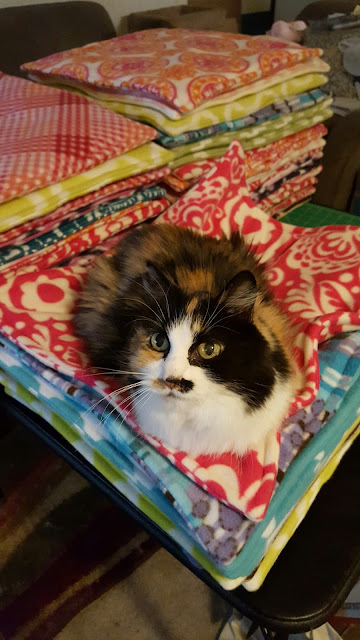 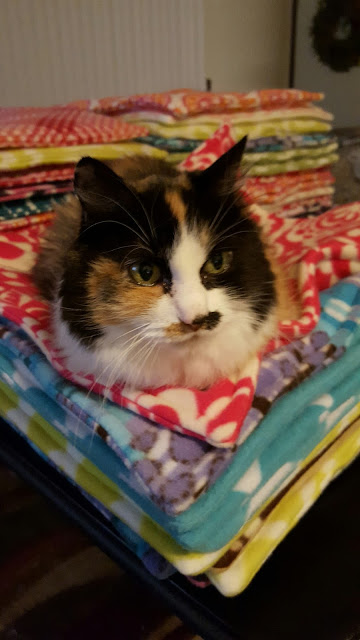 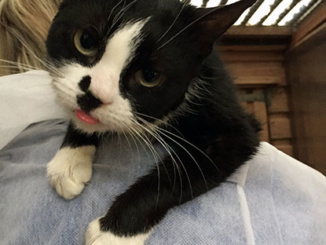 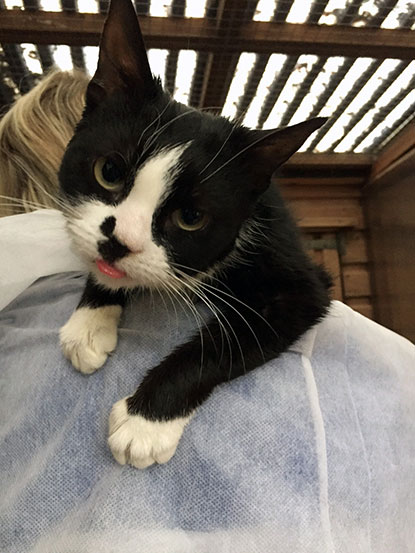 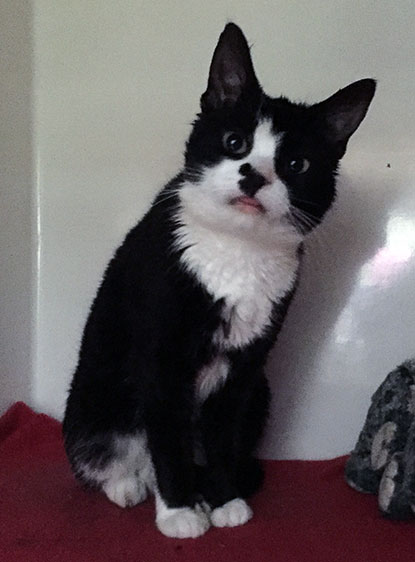 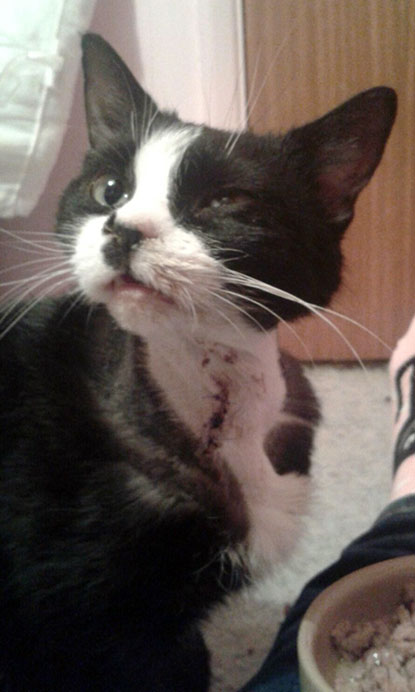 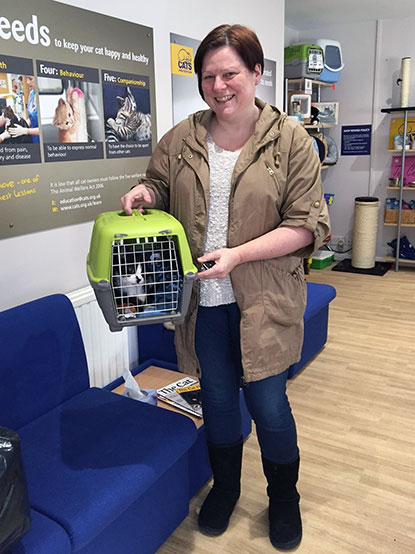 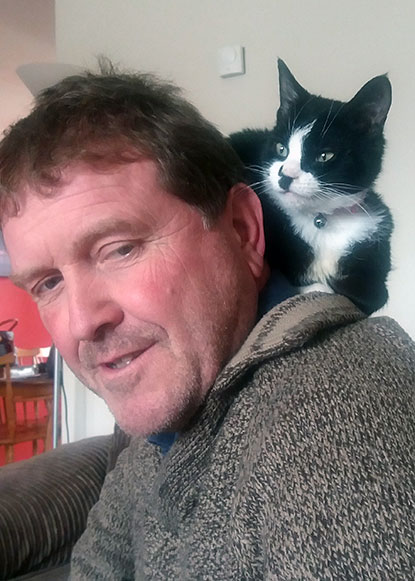 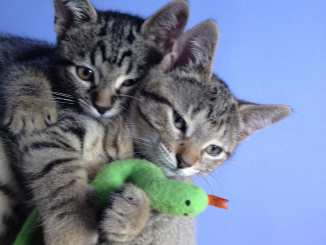 When Paul Fleming decided just more than a year ago to bring some furry friends into his life, he decided two cats were better than one – and that those two should be rescues. After a bit of searching, with help from his then 11-year old daughter, Zoe (“a really, really big cat lover”), Paul found what he was looking for.

“I decided I wanted a bonded pair so we could keep them together,” Paul said.

Brothers Charlie and Leo were in a feral colony that had been rescued by ACR and were being fostered by the aptly surnamed Pat Hope. As with the majority of feral rescues, the kittens were leery of humans, especially strangers.

“They were very shy,” said Pat. “We had to spend a lot of time playing with them, cuddling them, getting them used to being handled. But that’s really a pleasure. And they turned out to be really nice lil’ cats.”

Thanks to Pat’s patience and hard work, the meeting between the Flemings and the young brothers was a success and a new family was formed.

“I knew from the get-go that they were rescue cats and it was going to take awhile to get them to come out of their shell.”

For Charlie and Leo, that shell came in the form of Paul’s bed.

“It took about a month before they would come out [when people were around],” said Paul. “But that was fine. We brought them their food and we just let them become socialized on their own terms.”

The first breakthrough came at night, when the home was still and safe.

“They would both come up and lay with me on the bed for a half hour or so, and that was great,” said Paul.

Now, with Leo – the less timid of the two – leading the way, he and Charlie – the “troublemaker” – are full-fledged members of the clan… any time of the day.

But as much as you can socialize them, at the end of the day cats are still cats: “They both love to play with their food. They take the kibble to the top of the stairs and let it fall specifically so they can chase it down. They still need to ‘kill’ it,” said Paul with a laugh.

Paul, who, prior to Charlie and Leo, owned a single cat who lived beyond 20 years, doesn’t hesitate to recommend a bonded pair to anyone who was considering it.

“It’s great to know when I’m not home they’re not lonely,” he said, “because they’re going to be hanging out together, playing together and enjoying themselves.

“And it makes me feel good that they have each other.”

And surely Charlie and Leo feel just as good that Paul gave them that chance to be together, forever.

Foundation Głosem Zwierząt (Voice of Animals) is probably one of the best foundation in Poland. They help cats (and dogs) everyday. It is a non-profit organization whose mission is to improve the lives of feral, stray, and free-roaming cats. Support them. Help cats. Make donation.

In addition to their rescue and adoption program, foundation offers a subsidized apay/neuter assistance program. Foundation also offers cat care information and spay/neuter education to the public to promote responsible pet ownership and reduce the problem of pet overpopulation.

How You Can Help? Support Foundation Głosem Zwierząt. Help Them Help Cats.

Foundation Głosem Zwierząt receives its funding from public donations, grants and fundraising activities. Theis supporters are people just like you, people who care about the homeless cats and want to make a difference in their lives. They have no paid employees. It is an all-voluntter group.  With your help, they can make a difference for these cats and kittens. Make donation. Share it. 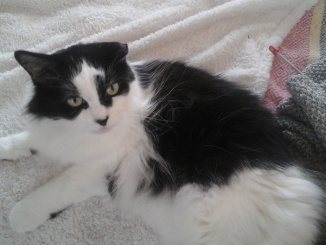